How did HBC evolve into an ESOP?

In the early eighties, a young Mike Howard sought a solution to a problem he saw in the industry. The term “tenant improvement,” as we now understand it, was not yet a fully developed category. Construction firms were doing it all, from core and shell to the interior. It was a noble pursuit, but by the time these firms got around to the interior, resources had run low. Little time and money were being spent on building the interior—the heart—of these spaces. Mike Howard’s solution? Howard Building Corporation (HBC).

HBC first opened the doors in the summer of 1983. Mr. Howard was quickly joined by two partners, Gary Conrad and Paul McGunnigle. The trio forged ahead in unmarked territory, vowing to become so good at tenant improvements that HBC would solve a client’s problem before it was expressed. Every new project was an opportunity to build a relationship just as much as it was an opportunity to build an interior. This philosophy did not just extend to clients and industry partners—from the outset, HBC was committed to treating employees like family.

“While we’ve accomplished much over almost four decades of Howard Building Corporation, to me, our finest moment is when Gary, Paul, and I decided to sell the company to the employees. After all, the employees are what makes HBC the success it is today.” – Mike Howard, Founder

Over the years, the company grew, and the owners ran into another problem. What would HBC’s succession plan look like? A valuable company that had earned its place as an industry leader couldn’t be entrusted to just anyone. The solution took the form of an ESOP (Employee Stock Ownership Program) and, in 2014, the three founders sold the company to the very people who helped build it—the employees. Today, HBC is proud to be a 100% employee-owned company.

What is an ESOP?

ESOPs are created when an owner of a company chooses to sell their company to the employees, rather than an external buyer. They are intended to provide employees with a meaningful stake in their company at no cost aside from their effortful work. The result is an ideal situation for the owners, employees, and the business as a whole. By owning the company in the form of shares, employees are provided with future economic security and an additional source of income upon retirement. Although ESOPs have gained momentum in the past two decades, they are few and far between in the United States. As of 2018, only 6,400 companies are designated ESOPs.1 Despite the small numbers, a considerable amount of research has been conducted on their impact. Beyond the financial benefits of the profit-sharing model, researchers have widely documented several positive outcomes.

Employees, and companies, that are part of an ESOP widely experience greater financial stability. Many ESOPs offer a stock ownership program in conjunction with another retirement plan, such as a 401(k). Furthermore, when compared to traditional companies of the same size and profitability, ESOPs have more employment stability, including fewer layoffs and lower turnover rates.2 ESOPs are more likely to pay fair wages, offer better benefits, and supply more formal training and education opportunities.2,3 The natural byproduct is increased worker productivity alongside a sense of ownership.3 Historically, ESOPs are more likely to survive economic downturns, as documented in the Great Recession of 2008.2,3 ESOPs generally perform better than their counterparts—over half of the companies in Fortune Magazine’s “100 Best Companies” list are ESOPs.4

“When I joined HBC, it did not take long to realize that this was much more than just an ‘employer/employee’ relationship, but truly more of a ‘family’ relationship. When the ownership decided to turn HBC into an ESOP, it just enhanced my impression of what a great company this is.” – John Cools, Senior Superintendent

How does being an ESOP shape the HBC story?

Since becoming an ESOP in 2014, HBC has seen continual growth. Sixty-two of HBC’s employees became 100% vested in 2020. This means that they have been working at HBC for over six years and are entitled to their entire ESOP account, rather than a percentage, when eligible for distribution. A volunteer-based ESOP Communications Committee meets monthly to plan educational workshops, fun events, and ways to engage and support their fellow employee owners. HBC’s strong family-based culture and ownership mentality existed long before 2014; however, becoming an ESOP put into action the very values that have always existed in HBC. Now, employee owners are empowered to seek solutions by taking ownership of every problem they encounter, just as Mike Howard did when he helped pioneer the tenant improvement industry. 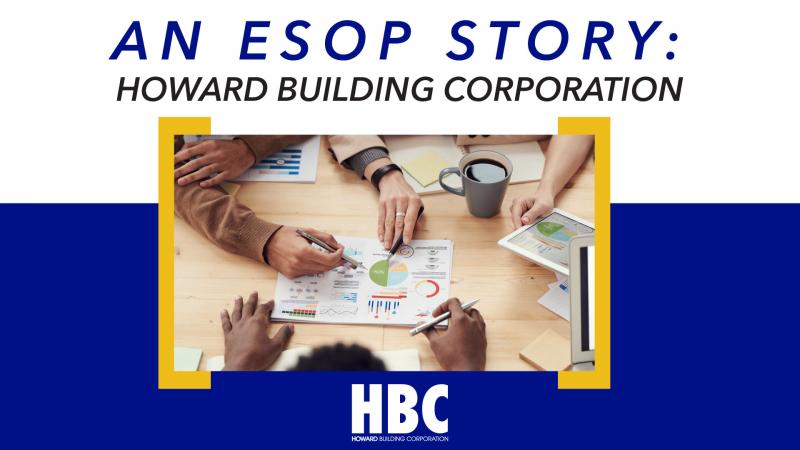