HBC is pleased to announce that Genevieve West has been promoted to Vice President. In her new role, she will oversee the Business Development and Marketing departments while serving as an additional layer of executive support.

In her previous role as HBC’s Director of Healthcare Services, Genevieve had the unique position of expanding the company’s healthcare division while strengthening relationships between the real estate and healthcare sectors. With the wealth of knowledge that she brought with her when she joined HBC in 2016, she has since woven HBC’s services into the fabric of Orange County’s healthcare development. The result has been the streamlined completion of several major facilities and continued success during the rise of patient-centered healthcare.

Over a 20-year career, Genevieve has provided strong direction for over $130 million of real estate development, resulting in LEED certifications, OSHPD 1 & 3 compliance, and several awards of excellence. Her active involvement with local and national organizations, including Women in Construction Operations (WiOPS) and the California Hospital’s Heart of the City 5K committee, allows her to contribute wisdom alongside industry leaders for the betterment of the community. Her longstanding involvement in Building Owners & Management Association (BOMA) and Commercial Real Estate Women-Orange County (CREW-OC) reinforce her role as mentor and leader in Orange County.

The years 2019 and 2020 signaled the dénouement of several pivotal projects under Genevieve’s direction, including Hoag Health Center (Foothill Ranch) and the repositioning of the Yorba Linda Packing House to a medical facility, among others. Within the span of these same years, Genevieve successfully bridged gaps and developed relationships between large healthcare systems and industry giants, such as Hoag, Sharp, and renowned developer, PRES Real Estate Companies.

In 2020, Ms. West was nominated by the Orange County Business Journal as one of the top businesswomen in Orange County. After being named a Woman of Influence by GlobeSt. the year prior, she was invited to speak at the 2020 GlobeSt.’s Elite Women of Influence Conference. She also sits on the advisory board of University of California, Riverside’s Extension Design Thinking Program.

We welcome Genevieve West to her new role as Vice President and look forward to great success for both her and the company! 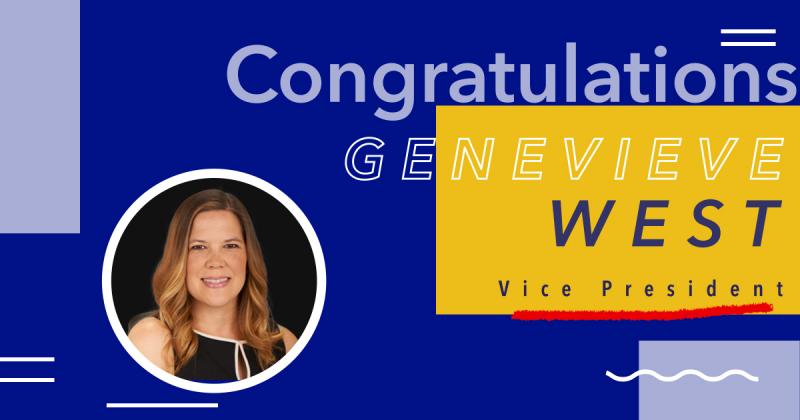